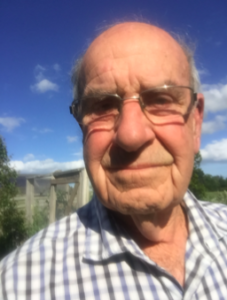 I was born and grew up in Lower Hutt and spent the first two years after leaving High school working as a laboratory assistant at the Nuclear Sciences Div of the DSIR. Interesting work but somewhat repetitive, so jumped at an offer to become a shepherd on a sheep and beef farm east of Masterton.

That led ultimately to taking on a married shepherd’s position after working as a tractor driver in British Columbia, Canada for a year on a mixed farm attached to a mental hospital. Neither the hospital nor the farm exists today, and their demise had nothing to do with my involvement in the operation. I then spent a number of years managing demonstration, research and stud farms until joining Radio N Z as a rural broadcaster in Northland and the Wairarapa for ten years.

Following redundancy, my wife and I bought a bookshop in Masterton, which we ran for 15 years before selling up and retiring.  That’s when I discovered men’s sheds by joining the Henley shed in Masterton shortly after it started. The first purpose built shed in the country, it has continued to grow and develop in the last ten years, being expanded three times since its opening and now boasts a membership of around 150 blokes.

We became incorporated seven years ago at which time I was elected Chairman, a position I held until this year when I stood down. I have a passion for the organisation and what it can do for the community it supports and the benefits its members derive for their own well being by being part of a very diverse group of guys working together, sharing their knowledge and skills and enjoying the camaraderie such activity generates. Henley, has also been directly responsible for establishing the six other sheds now operating in the Wairarapa. We’ve now run out of towns.

As the region 3 rep, I hope to assist those sheds, operating or emerging, who can make use of what I’ve learned from my involvement at the “Mothership”, and help to grow the concept of what men’s sheds are all about. So if you’ve got a query, or anything you think I maybe able to help with, then don’t hesitate to make contact.