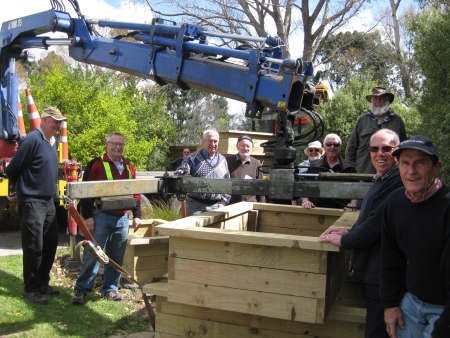 The newsletter has been pulled together from information provided by sheds and the executive of Menzshed NZ and it shows. As it is the first issue, the content has not been trimmed to only the newsworthy items. Bare with us, the next issue will be different.

The newsletter is in 3 parts which can be downloaded for reading by selecting the following links:

A few of the links in the documents will not work as intended and are reproduced here:

Already half way through the first year as a National Organisation, and how it has flown by, and how Shedding has grown in New Zealand.

Men’s Sheds are really gathering momentum with groups of blokes getting together to scope out what a Men’s Shed would look like in their community, others have moved beyond that stage, having set up in their first premises, creating that place where blokes will make things happen.

Men’s Sheds reflect the blokes and the community in which they are created, not just in towns and cities, but rural locations have their own unique way of getting together and making stuff happen, so too Men’s Sheds anywhere.

We have heard of a great number of phone calls, web enquiries and visits to existing Sheds in search of ideas and solutions to getting a Shed started. So willing are the responses that support and encourage the next Shed to make a start in growing this already global phenomenon.

A new and very functional website is now in place (www.menzshed.org.nz ), with new material being added weekly. This will become a fantastic resource for those who are interested in Men’s Sheds in New Zealand. The shed locator is great for those who like to travel around the country, finding where and when you can drop in on another Shed, say hello and share an experience.

With the founding constitution registered and charitable status being pursued, the structure is in place to support the development of Sheds.

The media has provided great coverage with TV, radio and print medium making others aware of the great stuff blokes and their Sheds are doing in the community.

Most of all its the low key way people are providing support to each other (without pomp and fanfare), that is so encouraging and in the end will be the most helpful in getting things done, within one’s own Shed and in conjunction with others.

Waikanae Conference (March 2014) planning is well underway and will provide another great opportunity to share and experience Shedding – Kapiti Coast style. More importantly it’s your opportunity to talk about what is important to your Shed and about the future of Shedding in New Zealand.

The greatest thing about a Men’s Shed conference is that we all have something in common, so the networking between us is the magic that we can take home and work with into the future.