The Menzshed Pegasus-Woodend Community Trust was formed in November 2019. We started with about 10 members who had been meeting monthly for a year or so before that.  We set up our first shed at the “Old Waikuku School Collective”, in an old classroom which we partially renovated in lieu of rent.

We currently meet at our current temporary location in an old farm building at 70 Mapleham Drive, Pegasus

We have increased our membership, acquired a range of tools and equipment, and established ourselves in the community, working on a wide range of projects.  We have recently been awarded a grant which will be sufficient for us to build a new shed on land at Gladstone Park, Woodend for which a “licence to occupy” has been approved by the Waimakariri District Council.  We are hoping to be moved in to the new shed by the end of March, 2021. This shed will be known as the “Advicekiwi Menzshed Pegasus Woodend” in recognition of the funding generously provided by AIA Vitality through Advicekiwi. 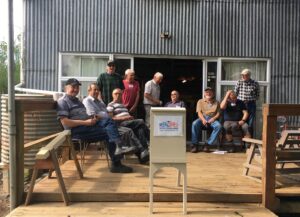